29 replies to this topic

Death Knight
Nord for the dawnguard all the way, and i guess wood elf for the vampire lord, call me predjiduce, but dark elf seems to suit vampire better, or maybe kajihit?

Seriously though, I'd probably do Vampire lord first, see how royally I fuck up Skyrim, then save it on my other character. As for which character for which side, I might go with Wood Elf for Dawnguard, only because he is probably better with archery so he can make good use of the crossbows. If this isn't the case, then just ignore it. Vampire Lord first though.

David
The following is just speculation of what is unique to each since I have a PS3, and as a result, have not yet played.

[*]The ability to fly
[*]The bad-ass looking vampire form.
[*]Various new powers and attacks when in said form.
[/list]The Dawnguard...

[*]Crossbows (I don't know how/if they made this unique to the Dawnguard).
[*]Armored Trolls
[*]An upgradeable fort.
[/list]For me, it's going to come down to whether or not I see my character as good/evil. I'm also going to check out the Dawnguard fort and see if it's worth it, as it seems to be the only really cool benefit the Dawnguard have.

Achilles_lucky_5
i have ps3 so right now my plan is that,my nord is a werewolf who joins the dawnguard, my wood elf will be the vampire

Death Knight
Werewolf for dawnguard is a cool idea, just because of the classic werewolf VS vampire, but personally i don't play any creature or evil sided character, simply because I usually play a heavy armored paladin (either one-handed sword & shield or two handed greatsword, maybe restoration or maybe archery, right now my mainperks are heavy armor, smithing, two handed, enchanting, and a little bit of block.) or noble knight, sometimes a mercanary or monster hunter killing werewolves, vampires, trolls, undead etc. If i do end up getting dawnguard though ( hard pressed for cash, lost my job might have a new one at sobeys and my kids gunna be here in 6 days or less ) but if i do get it, i'll probably play vampire at least once to see how the storyline is, i didnt know about the upgradeable fort, which sounds totally bitching. I love things like that, i cant wait for online TES either, assembling an order or warriors, with a few priests and sharpshooters, guards and the like, all performing their duties sending out raids on other players bandit kings or theives dens and the like. Any information about the fort for the dawnguard ?

David
I don't know much other than that things like gates and what-not are added as you progress through the Dawnguard storyline. Apparently, anyway. I'm not sure how substantial the upgrades are if true. 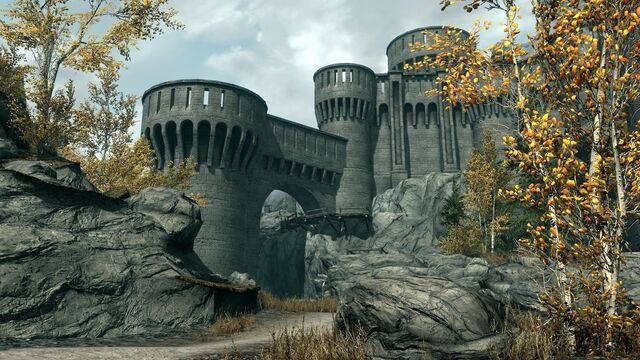 It's located east of The Rift, which partially explains why the landscape there is so amazing yet there was previously little reason to ever venture there.

Death Knight
Theres a few quests related to the east, south east & east of riften, and some really neat spots, the roads leading to morrowind & cyrodiil usally had those NPC's of the races, high elves kajiit orcs, thalmar imperials etc. A watch tower for the vigilants of stendarr etc. But the fort looks pretty huge, hopefuly its easy to navigate and has an armory you can interact with, akitchen, sleeping quarters training rooms/yards alchemy enchanting, maybe a blacksmith and whatnot for a shopkeep ? And when you get to be the leader a good sized room with a wardrobe, chest, a few maniquins, weapon racks, plaques the whole she-bang. and hopefully you can recruit and randomly get attacked by varrying waves of the the undead/vampires ? looks like the vamps have a few lesser & greater monsters on their side. Also new weapons armor and staves ? probably just faction related, but i dont always play with the best armor & weapons. When i do quest lines like the civil war i usally wear according armor & whatnot, also i saw in the civil war disscussion that it would of been nice to see a family war torn or something like that ?.. the grey manes and battle borns are torn, where you have to rescue the son from the fortress, and some other stuff/quests like that as well.

Achilles_lucky_5
i am thinking of making another save specifically for vamp lord, my only problem is choosing a new race and i've narrowed it down to high elf or breton

Blake
I always figured a Dark Elf would make a decent vampire as their resistance to fire would help balance out a vampire's vulnerability to fire.

yeah, but I'd rather save those enchantments for something else.

Huygens
Ah shit, can you be a vampire when you're a werewolf? Totally didnt think about this. But I love the companions so much

Back to Skyrim Questions and Help