1 reply to this topic

Who In TRR had Attended: Blexun, Tcee, Carroll, Jugger, Torpedo stuck it out the whole way. Dragon dropped out and Tynisa was just spectating.

Notes: A lot of fun and definitely worth doing again sometime. 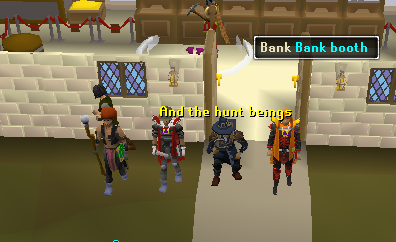 Jugger, Torpedo, Blexun, and Carrol. Dragon ran off before the shot and Tynisa and Tcee came afterwards 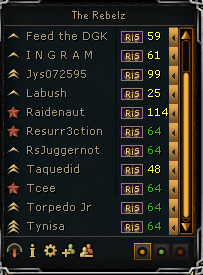 After getting appropriately dressed for the event, I met the treasure hunters at Falador west bank. After handing out keys, the adventure begin. Here are the clues and solutions if you have any questions or were following the topic.

Clue 1: Just a short walk from Falador and I find the supposed last stop of my drunken journey. A group of four people greet me, all dressed in rather high-end equipment. Between the troll slaying, they tell me of my attempts to join in on the mayhem last night, which explains the bruises across my chest. Just like the note said, I took a peek at the number of arrows the ranger carried, added up the digits, and wrote it down. I said good bye to the mercenaries and went on my way 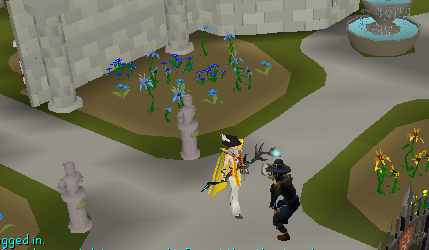 Tcee struggling with the fountain clue

Spoiler
Like this clue a lot. Not too hard but still pretty can be challenging if you didn't know there were trolls north of Falador *cough*Torpedo*cough*. Anyway, north of Falador, inspect the rangers gear and he has 900 arrows. 9+0+0 is obviously 9.

Clue 2: Next, I walked west, past a bunch of refugees from a Troll torn town and through a popular fishing community. Kept following the path and I found myself outside an impressive castle, supposedly filled with knights. Even though I was a tad hung over and didn't remember if I offended them in anyway, I had enough chivalry to leave them alone just in case. Instead, I pressed myself against the fence and took note of the fountains outside and inside the castle. And, just like the note said, I subtracted the fountains on the outside from the fountains on the inside. Again, I wrote this number down and continued on my journey.

Spoiler
My favorite clue out of the bunch. I got to use a pun: CHIVALRY LOL! Anyway, ran into some trouble with this clue as there is a fountain to the north east of the castle that I didn't include. This threw Carroll off as he pseudo-cheated by using the world map. I did mention pressing myself up to the fence and looking at the fountains. So bottom line, play along kids. Anyway, Camelot, 5 fountains in the front, 3 on the outside, so 2 was the answer.

Clue 3: Continued retracing my notes, down a road through a town of psychics and mages and ended up at a junction: A bustling city to the south-west, a top-notch fishing spot to the west, a guild for the nimble fighters to the east, and an old man in a shack to the north. I visited Jack, who told me how he found me chasing the chickens and stealing their eggs. After a quick apology for the commotion I caused, I took note of the number of chairs and stools in his entire house, wrote it down with the rest of the numbers, and asked Jack where exactly did I come from before messing with the chickens. He just handed me a teleport I must of dropped. Before I know it, I was somewhere a lot different.

Spoiler
My opinion, probably hardest clue here. It wasn't in a popular spot, so I depended on the solver's ability to realize the first three clues were all along the road. Most everybody figured it out though. It was also here I realized I'll need to change locations to spice things up a bit. Anyway, Grandpa Jack's house has 6 stools/chairs.

Clue 4: As I came out of the teleport, I notice the immediate change in weather. It was hot, dry heat, not helped at all by the jungle and the near by volcano. After surveying my surroundings and figuring out where I was, I walked west to the nearest town. Upon entering the biggest bar there, I was stared upon by a large number of pirates; who were either looking angrily at me or laughing like they were remembering a hilarious occurrence. After apologizing to quite a few pirates for making an arse out of myself, I ordered a Grog, taking note of the price of one. I then added the price of the Grog and the number of big windows together, wrote down the number, and went on my way. Afterwards, I hopped through a house portal, shuddered at the destruction I've caused, and took one of my portals to another town. 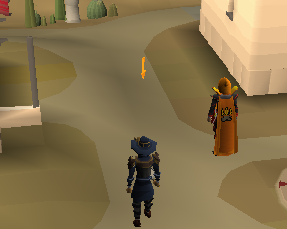 Carroll on the verge of digging it up. Let's just say Carroll isn't too good at hot and cold games....


Clue 5: As I exited the portal, the smell suddenly hit me; a horrible mixture of dog, swamp, and death. After asking around the bar, a certain vampire told me that he saw me engaging in a drinking contest with a red demon in green clothes. Finally, I found the source of my forgetful night. After thanking the vampire, I made my way to the demon, who was only a short walk away. He was very intimidating, and maybe a bit angry that I beat him, but he told me what he knew about last night. Despite the full details, I was still confused as he told me I was wearing my prized possession at the bar. After bringing this up, the demon looked a bit guilty and confessed he stole and hid it before sending me on my way. He admitted that even he forgot where he hid it, but wrote a note just in case he had to remember. After taking the note, I visited the local food shop, took note of the number of kinds of fish he sold, even though he was out of stock, and read the demon's note on the location of the chest.

Spoiler
THE CLIMAX OF THE STORY! Mezchna is a pretty cool and mysterious NPC, so I thought he was a worthy character. Anyway, 4 types of fish sold at the Canif's meat store. 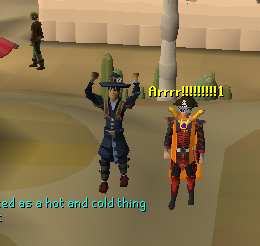 BUT HE FOUND MY PIRATE HAT+EYE PATCH!


Location: Hid human's hat at desert place. Don't let palace guards see when dig it up. Stand on top of hot metal burner's stairs. Then step like this: You will get these directions upon correctly pming me all the numbers you found. Take glider for celebration gnome dinner.

Spoiler
Al Kharid, obviously. After figuring out keys can be used to play a hot and cold style mini-game. I abandoned the directions thing.

In the end, it was a lot of fun. I learned a bit about doing this type of event and we can expect huge prizes in the future. Thanks to all the people that came.

Carroll 1
It wasnt that i wasnt good at H/C mind you i have lost a bit of money that way. but the key was misleading. considering it kept saying it was colder when it should have been hotter. Found it in the end as well as gave you a laugh or two. VERY FUN event, along with being very thought out. Props to you Blexun. I enjoyed the storyline.

Back to Event Reflections