35 replies to this topic

Blake
I always wanted to assinate a bear.Shaping up to be pretty epic. Not sure how I feel about navigating the wild terrain as opposed to the cities, but Boston and New York looks promising as far as cities go.

America. The 18th Century. The thirteen colonies are on the brink of Revolution. Our protagonist, Connor, is thrust into tumultuous 18th century Revolutionary America. Born to a Mohawk mother and British father, he struggles to find his place in a world that views him as an outsider.

Assassin’s Creed III invites players to experience the untold story of the American Revolution through the eyes of a new Assassin, Connor Kenway. Designed from the ground up over more than two years, Assassin’s Creed III takes one of gaming’s most beloved franchises to new heights.

The year is 1775. The American colonies are about to revolt. You are Connor Kenway, an assassin who has sworn to secure liberty for his people and his nation. To do so, you will hunt your enemies across a staggeringly large, open, and realistic world. You will unleash your lethal skills in a violent quest that will take you from chaotic city streets to blood-soaked battlefields in the hostile American wilderness and beyond. You will meet legendary heroes of American history, and together you will conspire to annihilate those who threaten Liberty itself.

Whether you use your predatory instincts to kill silently, or your fearsome arsenal to kill openly, one thing is clear: the world that the Assassins live in has become far more deadly. And so have you. 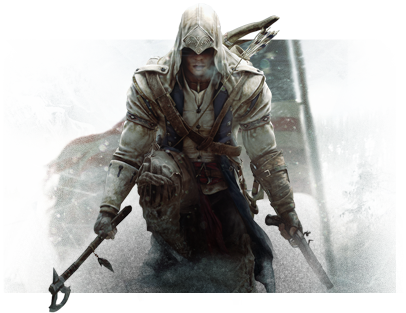 You are Connor Kenway, the warrior son of a Native American mother and British father. As a bloody revolution draws ever nearer, your clan is threatened by a powerful group seeking to crush the American revolution and control the thirteen colonies. Shocked into action by the devastation of your village, you pledge your life to the cause of freedom, and embark on a decades-long quest to achieve it.

Your predatory instincts, honed by years of hunting through unforgiving wilderness, allow you to stalk and eliminate your targets in utter silence. When open combat beckons, you will unleash a staggering array of new weapons including tomahawks, rope darts, firearms, and more. Centuries before the term “black ops” is defined, you will pioneer this new kind of warfare.

There’s the American Revolution you know from history books. And then there’s the revolution you’ll be fighting, set in a world that’s far more realistic, gritty, and alive than any history book ever could be.

Pursue your enemies through a massive, dynamic world whose only constant is that it’s always changing. From the legendary battlefields of Lexington and Concord and the crowded streets of Boston and New York, to the snow-covered Appalachian wilderness, you’ll wage war in a stunningly alive and open environment. Whether you’re tracking your quarry’s blood trail through freshly-fallen snow, or taking advantage of howling winds and dense fog to conceal your attack, one thing is certain: you’ve never fought this way before.

Throughout your quest, you’ll encounter the legendary characters who guided a young nation through its tumultuous birth . You’ll meet iconic figures such as General George Washington, the tenacious commander-in-chief of the Continental Army and first President of the young United States. Or Benjamin Franklin, the renowned inventor, scientist, author, and revolutionary statesman. And Charles Lee, the ruthless general who played key roles in some of the war’s bloodiest battles. This is not just your chance to witness history, it’s your chance to make it.

Experience the jaw-dropping power of Anvil Next, the all-new engine designed exclusively for Assassin’s Creed III. The team spent three years building this revolutionary system from the ground up, and the results are nothing short of breathtaking.

It begins with stunning breakthroughs in motion-capture, animation, and AI technology, which deliver more realistic character animations and interactions than ever before. It continues with dynamic weather, seasons, and time, which significantly affect the world around you. And no all-new engine would be complete without a dramatically-expanded combat and stealth system. Take down your enemies with tomahawks, pistols, and more. Use your instinctual tracking skills to learn what happened after an event, and shape your future actions accordingly. Experience the true scope of war as thousands engage in battle.

I always wanted to assinate a bear.Shaping up to be pretty epic. Not sure how I feel about navigating the wild terrain as opposed to the cities, but Boston and New York looks promising as far as cities go.

To "assinate a bear" doesn't sound too good... I didn't know you had such fantasies, Blexun...

Yeah I won't lie it looks cool, but then again I'm pretty much happy with anything Assassin's Creed

the structures are going to puzzle me though....jump points from 10-20 meters?


Not sure how I feel about the whole tree hopping thing, but I'll wait till it comes out to trash it. I will like to add the outfit doesn't look as out of place as I thought it would when I saw the box art, besides that bit that hangs towards the bottom.

And hanging out with ol' George DoubleYa will be fun.


i dont know why i quoted this

"Desmond is going to be a bigger part of this game than ever before,"

I doubt they would add that cause I'm pretty sure from what I've learned they weren't in Arizona during that time in fact it were only near or in the 13 colonies...so i doubt they were there cause I'm pretty sure nothing was out there at the timeLMFAO @davidon the other hand I think I'm going to enjoy the 2 handed combat compared to the single handed combat in the previous games.

Screw you. I love Desmond.Also, I seriously doubt the Grand Canyon will be added since the first Americans to really explore and settle around there was James Pattie in like 1820something, A good 50 years after the events of ACIII

Anarchy
I fear that the tree running aspect of the game will have glitches :/ I pray it doesn't

I fear that the tree running aspect of the game will have glitches :/ I pray it doesn't

Yeah I can really imagine that it might, but they've been making this game for like over 2 years, so I'm going to give them the benefit of the doubt.

David
Why would trees be any glitchier than the building climbing?

Why would trees be any glitchier than the building climbing?

idk cause they're oddly shaped? and it no a flat surfaced object it more freely designed and your more likely to run through branches and them not break..

Blake
Thanks for the video Anarchy. More things to add then.

[*]Rope dart is kind of unrealistic. I mean he just pulled him over a tree with it.
[*]The moveable hiding spots are pretty cool. If anything, make hiding more useful.
[*]The sneak thing where you hid behind buildings is a long awaited update for me, especially considering I pseudo did this in other AC games.
[*]Camera and animations looks more "dynamic", if that makes sense. Also, running through buildings is pretty cool.
[*]The city doesn't look at boring as I thought it'd be. Wider open, but still looks fun to navigate.
[*]Parts of the combat system looked like the same counter attack, rinse, repeat. The parts where he just ripped 5 guards in 3 seconds looks different though.
[*]Yeah, Connor looks reaaalllly out of place. Not as bad as I thought he'd be, but still.
[*]And finally, he's half European, half Native American, so you can see how this bridges into Desmond.
[/list]

Thanks for the video Anarchy. More things to add then.

[*]Rope dart is kind of unrealistic. I mean he just pulled him over a tree with it.

[*]And finally, he's half European, half Native American, so you can see how this bridges into Desmond.
[/list]

[*]The rope dark could make sense in the sense that Connor is a heavier person with his armour and stuff...but then again he doesn't wear much armour to start off with.
[*]I don't think Connor is even Desmond's bloodline...isn't it (Clay Kaczmarek) Subject 16's bloodline?
[/list]