Blast Corps. The Bane of My Childhood

So, about 2 weeks ago I was rummaging around for a good n64 to play. It wasnt long before I came across... this.

I remember first seeing the game being reviewed on G4 at an early age, (This was after i discovered there was an entire channel dedicated to video games, you cannot imagine how ecstatic i was. my childhood was videogames.) The thought of a game entirely dedicated to blowing shit up intrigued me, the chance to drive around in a giant robot and/or bulldozer and destroy structures was too tempting to resist. the very next day I bought the game, and popped that puppy in the N64. 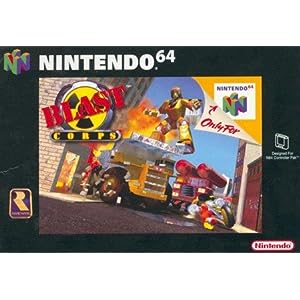 So, if you've bought used N64 games before, you know that you're not going to find an empty save file. They're all taken. But who cares? I didnt care. I just wanted to blow shit up, so I selected the complete file and jumped right in.


So, I wind up staring at the earth. There are about 30 different areas on this map that I can go, and blow up. I select the closest place to my house on the map, and start it up. I found myself in the middle of a level.

I immediately cant figure out what to do. I mean, i'm a bulldozer but thats about all I can figure out. I've got someone yelling at me in the corner to clear the way for a carrier, who is slowly progressing through the streets. (Ok, you know your city has zoning issues when buildings become street obstructions.)

First thought? Well, go run into shit. I'm a bulldozer. No, not that simple. Not at all. I ran into the first building and bounced off. Its a problem when you can figure out how to blow something up, in a game dedicated to blowing something up. See, there are also 5 other vehicles scattered through this map, each of them dedicated to something, but no explanation. you can jump out of your vehicle, and run into another one. My guess is they were each dedicated to destroying certain buildings or something. idk.

So, anyways. I began to rage. I couldnt figure out anything, and I like to think i was pretty bright at that age. I mean i beat just about every other n64 game there was out there, except this one. no, this one was the bane of my childhood. I could never figure it out, never. The poorly marked objectives just had me running around driving and trying out all the vehicles, but never getting anywhere. Every now and then i was able to destroy a building, and my heart would flutter just a little. but then i'd be stuck again.

I decided to pick up the game and give it another go a few weeks ago, to see if i could figure it out at this age... Not so much. Still confused. still clueless. At one point i was put into a race as a motorcycle, racing a tricked out hotrod in a figure 8. Wut. When did this turn into a racing game? idk. either way, it found its rightful place back in my game drawer. One day I'll figure it out... one day.

Jul 22 2012 07:30 AM
I like these old games. Some of the games are really poorly made, like this one it seems. I can see why someone would sell it. I'd never sell my Nintendo or any of the games. Most of the games don't work anymore though, that's a bit annoying. I got like 3-4 Super Mario Bros, and only one of them work. I really recommend "Nintendo World Cup", it's a soccer game where you can shoot down your opponents. When you have shot them enough with your football they just stay down.

Jul 22 2012 11:55 AM
This reminds me of a Legend of Zelda game that I had as a kid on the Gameboy Color (Oracle of Ages). I got all the way to the 2nd to last boss and could not, for the life of me, figure out what to do. It took like an hour just to get there, and I would always die while in the process of trying to figure out how to even do 1hp of damage to one of its forms.

EDIT: IT WAS THIS BASTARD

EDIT: IT WAS THIS BASTARD

Time to confront your fears.
http://www.youtube.com/watch?v=Lofm_OxUoHQ&feature=player_embedded

Yeah I can relate to N64 games without clear objectives. I played some Japanime game where I was a ninja and I blew some whistle to summon a dragon. I had no idea what to do and took it back to Blockbuster 3 days early. And oh my god....SUPERMAN 64!!!

Edit: Googled "n64 game ninja dragon whistle" and came up with this
http://www.honestgam...views/7276.html
I love teh gewgle.

Jul 23 2012 07:01 AM
You had oracle of ages when you were a kid ? I was rockin pokemon blue and zelda:links awakening or whatever, the one with the whale and the dreams etc... Am I the oldest one on here ? i cant be because im only turning 21 next month.

Time to confront your fears.

When the music came on and the thing came alive I still almost shat myself in fear.

Am I the oldest one on here ? i cant be because im only turning 21 next month.

Nah, there are quite a few people 30 and up. I don't think many of them regularly post, though.