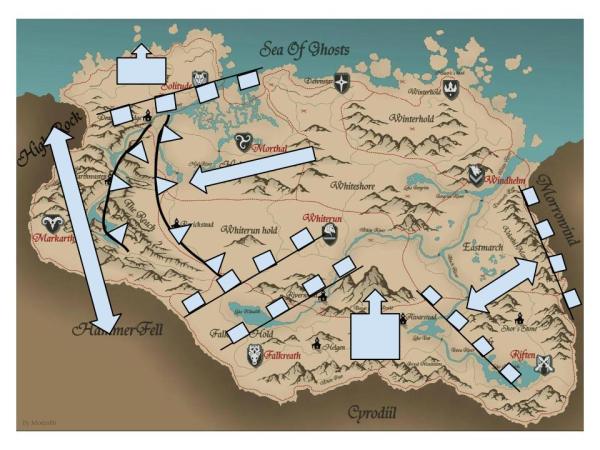 This week members of BGS pointed me to a fascinating read at Geo-HeritageScience — a blog from London resident, Jane Robb. With Bachelor and Master’s degrees in geology and years of work in the geoscience field (she current works  as a Communications Officer at Geology for Global Development), she definitely has a thing for rocks.

But she also enjoys spending free time playing videogames. During her adventures playing Skyrim, her passions collided, and she began to hypothesize about the location of specific rock deposits across the game’s regions. Here’s an excerpt from her post:

Here are the eight different kinds of rocks found in Skyrim. Not all of them are actually real however so the ones I will be discussing today are iron ore, gold ore, moonstone ore and malachite ore. Some notes: malachite is actually an ore in itself (of copper) and you do not get an ore of malachite; moonstone is a mineral and corundum is real (a mineral) but is found in Blackreach which is underground and cannot be shown on the Skyrim map.

“Here are the eight different kinds of rocks found in Skyrim. Not all of them are actually real however so the ones I will be discussing today are iron ore, gold ore, moonstone ore and malachite ore. Some notes: malachite is actually an ore in itself (of copper) and you do not get an ore of malachite; moonstone is a mineral and corundum is real (a mineral) but is found in Blackreach which is underground and cannot be shown on the Skyrim map”

Be sure to read the whole article at her blog, and then come back and check our our interview below. Modders should take particular notice!

How did you come to play Skyrim? Does your geology background factor into the games you choose to play?

I was initially introduced to the gaming world by my boyfriend several years ago as before I had never touched a console. I was instantly hooked. I mainly loved watching him play but then along came Oblivion. My boyfriend recommended it to me as he knew I loved fantasy (I read lots of fantasy novels and watch films) and I fell in love with the game. Needless to say I was then totally excited for Skyrim to come out, and completed the game and the first DLC in half the time it took him to play!

I have to say, I love it when I see geology in games. For instance in Fallout, I was always trying to peek at the geology, but loved the textured of the concrete and tarmac equally. I also find myself looking at the geology in films as well — recently having gone to see The Hobbit I found myself analyzing the geology of some of the sets — I can’t help myself!

Skyrim really blew me away with the scenery. It was a whole new experience from Oblivion and you could tell the designers had really taken time to make each area from scratch. This makes it much more interesting to play, and allows you to immerse yourself in the gameplay much more.

Your blog post provided a pretty intriguing hypothesis to the location of specific ore types in Skyrim. At what point in your playthrough experience did realize, “this all makes sense!”?

Well, the post is a transcript of a 9 minute stand-up set I did at an event called Science Showoff in London in January. (It’s basically an open-mic night for science-y people to stand up in front of a geeky crowd and tell funny stories about the science they do.) The idea of mapping the geology of Skyrim was something I had been considering for a long time, and Science Showoff seemed the ideal way to kick-start the project. Because of this, my time limit for actually interpreting the geology of Skyrim and delivering it to a live audience of 100 people was pretty limited, so my ‘research’ was actually not done in-game and instead I used the Skyrim Wiki which has so much useful information — as I say in my blog post, all I had to do was ask the right questions.

This meant that I chose carefully what and how I was going to approach the project: I limited the mapping to use of a few ore types and only looked at the places that they were most abundant (i.e. one location). I really didn’t expect it to all make sense though. Towards the end of making my presentation I just had that ‘holy crap! It’s actually working out’ moment and was pretty relieved because this was going to make a much better stand-up set than I imagined! I was also pretty impressed with Bethesda, thinking they must have had someone on their team giving scientific advice but, kudos to them, they didn’t and instead just had a totally awesome crack-team of designers who worked really hard to make it as realistic as possible.

Next step: actually going through all the locations of the ore deposits (and other rocks) and making a more detailed map as well as taking into account in-game geography.

From a geological perspective, have any of our other games (or anyone else’s games) perked your curiosity?

Well, as I mentioned Fallout is great for the scenery, and the post-apocalyptic nature of the game adds a new level to the geography of the area. Red Dead Redemption is also a beautiful game. Because this is also derived from a ‘real’ place, there could be some great in-game real-life comparisons to see how well the real geology can be modeled. Also Minecraft would be a good game to map, mining is obviously integral to the game, so I am sure using Minecraft as a learning tool through gaming would also work.

What interests me the most is using these games to actually teach people about geology and the scientific process. Video games are a great medium for getting people excited about things in a fun way and reaching out to totally new audiences to science. I have had so many comments from people on my blog saying how they either didn’t know know or hated geology until they read the post, and now they realize how interesting it can be. Honestly, science can be fascinating and I think games are a great way to show that to people without having to be too ‘in your face’ science communication.

You mentioned an interest in doing a geology mod for Skyrim. Any chance you’d like to share some of your ideas with our community?

Yes, I really want to do a more detailed map of the geology of Skyrim and integrate this into a mod which can show this in-game, as well as create a quest that allows you to do your own mapping project and gain a reward at the end — such as a new mineral or metal type from which to make some awesome armor. Ideally, the mod (or mods) will incorporate some more nice scenery, a cool quest and some inadvertent learning about science!

I need someone (or someones) to help me out with actually making the mod, I don’t know how to use Creation Kit, or what’s possible and what’s not with the software so some hands-on help and advice would be very welcome.

If modders are interested in helping out, what’s the best way for them to reach out to you?

Get me on Twitter @JLizRob, or send me an email janeliz.robb [at] gmail.com.

I would love to know what people think about learning through games, especially geology.

Thanks for the interview!