Posted by Eric the Bard, 15 May 2012 · 9,001 views
17th of May and russ!
Now, you may wonder what happens the 17th of May. Well, its the national day of Norway, celebrating the constitution being signed on the 17th of May 1814! But what is a russ? Well, graduate students celebrate the end of the year, although their exams isn't over yet. But that's because it fits so nice with the celebration of 17th of May. So from May 1th to May 17th they are partying every day, and they are trying to get these knots to have in their cap, showing that they have done some weird or stupid stuff. Like riding a tre-wheel kid's bike 5 times around the traffic cricle, or getting 5 teachers to sign your underwear. Now, I'm not russ, but my brother and his friend, who's staying with us are russ. And its quite fun to watch them get drunk every night and sleep all day when they get back from school. Because they still have to go to school, and they have to prepare for their exams, which is later. Ther russ is between the ages of 17-19, although the "black russ" isnt really accepted, since they are too young to drink legally (they are 17. and a few are 18, and 18 is the age limit). On the 17th of May, we also have parades.

Here you can see some different coloured russ. Blue is originally economy, but some have choosen to be blue eventhough its not really their colour. The red russ is general subjects. There's also black russ, which are on their last year of school, before two years as apprentice. Green is ecological russ, and white is christian russ. But christian russ do completely different stuff ofcourse, and green and white are pretty rare. Red is the most common. 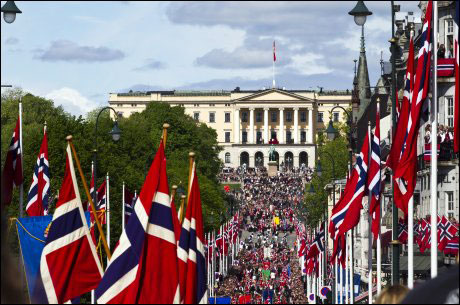 Here you can see the King's castle/palace, which is where the parade ends in the captial, Oslo.

Now you know a bit more about Norway!


Edit: Now I forgot to tell you about russ cards! They are sort of like business cards that the russ give out to people, mostly children who collect them. Most of the cards got jokes on them that the kids don't understand, but that the russ think is funny. I made an example of a russ card, so you can see what it's like.

Informitive and interesting blog though, I really enjoyed the pictures. The parade shot is really good.

I also forget that other countries have their drinking age below 21, which irks me a bit.

May 16 2012 01:18 AM
Double commenting woohooo! Can't edit on my iPhone. I wrote this in a hurry yesterday, and I might edit it a bit when/if I get the chance. I can see why you are confused. I forget to write a few words when I'm writing quickly. And some of it is just bad English or spelling mistakes.

May 16 2012 10:20 PM
Rather informative and interesting. I visited Epcot at Disney World recently, and Norway was my favorite attraction. I've wanted to learn more about it.

I just noticed all the spam comments on this article, lol.