A Translation of the Daedric Script Around the Dark Anchor 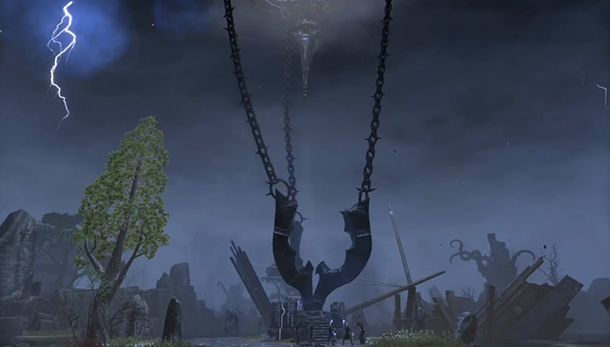 After seeing all the theorycrafting threads last thursday, I thought "Come on, there's gotta be something for the lore enthusiasts." So, I spent the better part of the night translating the Daedric runes found circling the Dark Anchor on the recent developer gameplay video. I was hindered a little when, for some reason, some of the text was facing the inside of the circle, while the rest faced the outside of the same circle. I copied them facing the same way on the picture.

I hope you guys find this somewhat worthwhile (at least), because I went in there thinking I'd find something meaningful, but ended up exasperatedly squinting at these mind-numbing messages. Though, on a brighter note, it's interesting how they decide to spell words, those daedra.

Apparently, it goes beyond just the omission of X's and Y's, as once previously thought. I might have just discovered a new aspect to the Daedric language right here. Now, we can say that, sometimes, daedra like to spell their words according to how they sound, as opposed to just making a direct obfuscated version of english text, minus the X's and Y's.

So, I guess I did find something out.

Very interesting. I hadn't even thought to look at that.

You must have excellent vision.

Well, I pieced it together as best as I could.

Updated the image. After getting to play the Beta, and unintentionally taking a screenshot of the same script, I apparently missed a couple of "s"es due to shoddy pixelation. Now, it says: "Coldharbour calls, Nirn obeys", just like in one of the in-game books.