A Khajiit Impregnates a Dragon

Draw the offspring in paint. 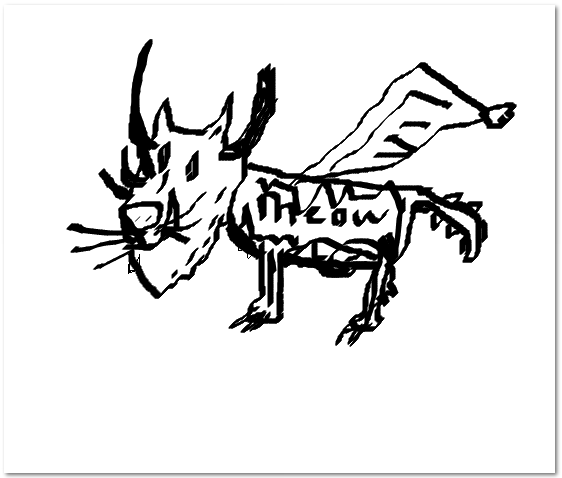 In this series of articles, I will introduce you to the lore of The Elder Scrolls series. I may even enlighten you lore-fanatics on a few subjects that you have probably never heard about.

This article focuses on the creation of the universe and planets, as well as the first few years of supposedly-remembered history.

Chapter I: Formation of the Universe

In the beginning there were two things: Anu, embodiment of Order, and Padomay (also called Sithis), whom is Change. From these two came chaos, or Aurbis. This creation, in fact, is the universe. It encompasses all. And all come from it.

Padomay was disgusted with Creation, and tried to destroy it. Anu came and did battle with him. Anu, thinking he killed his counterpart, cast aside his body in an effort to save what Padomay sought to destroy. During this, Padomay struck down Anu, but still, they were both thrown out of Time forever. The blood of these entities formed the Spirits of the light and the dark, the future beings to govern the aspects of the universe.

Then came Akatosh, which practically created existence in itself, imposing time and natural order. His existence made clear to the other Spirits that there was an order to things, and that order must be carried out.

One of the Original Spirits was a being known as Lorkhan. This being convinced the modern Aedra, or "Divines," and other Spirits on the side of Anu to aid in Creation. Magnus, the god of magic laid out the planning for the plane of Mundus. However, the process of creation was very taxing on the spirits, and they began to lose portions of their power, while some were wiped of their immortality. Those who lost their immortality become mortals, and the memories they have of creation became the modern mythos. Those who lost their youth and strength came to be known as the et'Ada.

The beings who did not aid in the creation sought to make their own worlds, which are collected in Oblivion. They came to be known as the Daedra, the forces opposing the Anu-aligned spirits.

Magnus decided to terminate the project, and fled to Aetherius, the land of magic, for where all afterlife is held. As Magnus fled, he tore a hole in the universe, and from this came Nirn's sun.
Some of the spirits fled as well, and the tears they made became the stars. These fleeing spirits came to be known as the Magna Ge, or "Star Orphans". The holes in the universe allow magic through, a force used to bend aspects of existence.

The Ehlonfey did not flee, and walked Tamriel. More and more Ehlonfey went to dwell on Nirn and came upon the Old Ehlonfey seeking friendship, but were rejected, and the two groups began to wage war. Their conflict caused much of the land to sink, thus creating the lands of Tamriel, Akavir, Atmora, and Yokuda. The realm of the Old Ehlonfey became Tamriel, and what remained of the wanderers inhabited the other three continents.

Along with the Ehlonfey, the Hist inhabited the land, but the war destroyed much of their realm, and they came to live in a small pocket of the world, known today as Black Marsh.

Akatosh, too, did not flee, and flung himself into Nirn. His impact on Nirn created the Adamantine Tower, the world's oldest structure. His presence forced all of the spirits to become orderly. At the Tower, he called a council of gods, where the Aedra elect to punish Lorkhan for what he caused. Trinimac tore Lorkhan's heart from his chest, and since he was unable to destroy it, he launched into the sky via arrow. The spot where the severed organ landed created Red Mountain and Vvardenfell - the Star-Wounded East.

The Ehlonfey on Tamriel came to be the Aldmer, or "Elder Folk". The Aldmer began to spread about the continent, and evolved away from each other. Some of them remained in their original land of Summerset Isle and became the Altmer. Early dissociates of the Aldmer were the Dwemer, and they left to inhabit the northern lands of Tamriel such as Morrowind, Hammerfell, and Skyrim, in search of a way to make themselves immortal. Emigrants from the mainland who dwelled in modern-day Valenwood became the Bosmer. More elves left to live in Morrowind, and those elves became known as the Chimer. A pocket of elves who worshiped the Daedra with fierce devotion were cast out, and they traveled to the Heartland of Cyrodiil, and thus became the Ayelids. The Falmer abandoned Summerset to forge a wealthy civilization in Skyrim. The secretive Maormer were exiled, and went to live on the isle of Pyandonea, where they practice powerful snake magic under the watchful eye of the immortal Sorcerer-King. The Orsimer came to be when the god Trinimac was devoured by Boethia, and was transformed into Malacath, which in turn warped the appearance of the Orsimer. They left to live in the mountains of High Rock.

Slowly the Atmorans descended from their homeland, and became the Nedes. All of them landed in Skyrim, the ones who stayed, however, came to be known as the Nords. The Nedes who went to High Rock and interbred with the non-Orismer elves who lived there at the time, and gave birth to the Bretons, whom had a great affinity for magic, as well as being human. The humans in Cyrodiil became known as the Imperials, but not after they overthrew their Ayleid masters, whom enslaved them long ago. The humans from Yokuda eventually left, as their homeland sank to the sea. These dark-skinned people landed ashore modern-day Hammerfell.

But all of that will be explained more another day. Fare thee well, adventurers! For I shall see thee soon!

So I commented on a Lore video on the Dwemer made by ShoddyCast. Heres what happened:

The Dwemer weren't unified, so it doesn't make sense why they would all spontaneously transfer themselves into a hunk of metal to achieve a radical goal.

Also Yagrum Bargarn was spared of the﻿ disappearance, and even tells you this bit of dialogue: "My only consolation is each day to mock the gods who destroyed my race, and condemned me to this bleak existence."

So I'm pretty sure that the gods swept their souls off of the realm of existence, fed up with their petty attempts to become immortal.

Incorrect, the Dwemer were unified, short of Yagrum who was in a completely different plane of existence and outside of The Calling.

Why doesn't it make sense to you? Every type of Mer has made attempts at the﻿ same goal.

I mean they weren't in the same part of Tamriel. Even if they could communicate mind-to-mind,﻿ it has not been stated that they were unified.

Just because humans are of the same race, does that mean we all shoot for a single goal?

Oh, and just to clarify (I was sleepy when I posted earlier), they all were unified, but not necessarily informed. Kagnrenac only gave half truths to his people (sharing their hate of being sub-gradients of the Godhead) to will them along. Most probably﻿ have no idea of the true purpose (that is conjectured).

Nevertheless, Yagrum was a very knowledgeable individual, and I do believe the Gods had destroyed them.

I haven't seen any proof of them achieving godhood. The Numidium was merely﻿ a construct controlled by the emperors using artifacts and powerful mage souls.

Honestly, nvm. I don't feel like explaining what really happened to you anymore. The devs themselves TELL YOU FLAT OUT. But hey, you seem like a douche so I'll pass.

There is no need to get mad.

The devs have never flat out stated anything. Much of the game's lore is up to the player's interpretation.

It's just my opinion, I trust the word of Kagrenac's trusted ally over books on theories of their disappearance.

Again, much of the lore is supposed to be twisted and confusing. No one knows what actually happened.

Have a nice day.

He later removed the comment calling me a douche.

Apparently people don't do their homework before commenting.

To all you naysayers...

First, let me ask you something.

No It doesn't. So stfu. Stop saying its cartoony and looks like World of Warcraft.

Do you think ESO will crash the Elder Scroll series?

If you said yes, you were sadly mistaken.

ESO is not being made by Bethesda, which can mean two things:

A ) It possibly wont be a buggy pile of horse-crap

B ) It has no relevance to the main series, and will not effect future titles.

On a side note, what I've seen of ESO isn't lorebreaking whatsoever. The team has worked in-depth with the creators, and using all lore sources from the games to bring about a lore-friendly, cool game world.

So please, If you have something negative to say about this game, keep it to yourself.

You're just going to buy it anyway.

What features are you looking forward to the most in ESO?

Well, please don't flail me alive for not adding an "All of the Above" answer @_@

If we can get past that, I'm intrigued to see what will come up from this (if anything).

Personally I want all of the above.