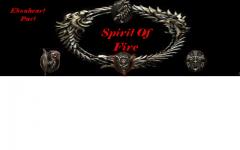 The group known as the Spirit of Fire was created shortly after the tribunal betrayed Nerevar and killed him to obtain god hood. Most of the Chimer (now Dunmer) after being turned dark became angry and hateful chose the life of war and strife. A few however chose the path of redemption. These Dunmer did not know if it would grant them the privilege of being brought back to their former selves but they knew that by doing right they could do more in their land. For centuries they consisted of only Dunmer but as wars and strife’s plagued the lands around Morrowind (Black Marsh and Skyrim) some of the Nords and Argonians began searching for a place to use their abilities for good to fight the constant battles of the rich and power hungry and the ancient evils that are always ever so present in the land of Tamriel. So now as Molag Bal begins to battle the known world the ancient order of the Spirit of Fire gathers their forces and prepares to battle this ancient evil. Amongst preparing for this great battle another begins for the land of Cyrodiil and the great white and gold tower against the empire. Many desire to join forces with this ancient force of good but only few are viewed worthy through the trinity of Deadra Loards that these people worship, Azura, Meridia, and Nocturnal.

The first priority of The Spirit of Fire is to defend the lands against ancient and Deadric evils that cause chaos and disaster. As such we will be up and running and hit Molag Bal, and any other evil that may rise, with everything we have and we will always fight until we succeed.

Our second priority, the battle for Cyrodiil, is in no means any less important and will be given all the attention that we can afford while fighting the evil that is always lurking in the shadows. We will fight with our fellow Nords, Dunmer, and Argonians to gain power and control the central government of Cyrodiil.

Those who wish to help fight the battle by craftsmenship and by exploring are very welcome. Those who wish for the help and support of you great and unique people will be required to bring the necessary materials and/or currency.

The remainder of the players will be named after their primary function in the guild. The raider (The righteous), the PvPer (The Just), the crafters and explorers will be called the Soul of Fire.

If any who apply wish to become an officer of any kind before the game is released will have to go through me then after that will have to strive to prove that they deserve the rank within a few months of the game of launch.